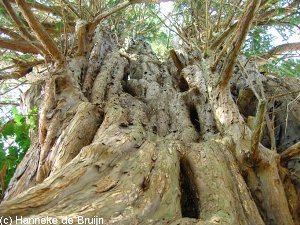 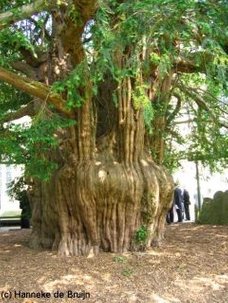 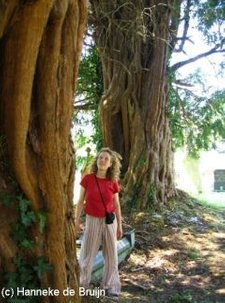 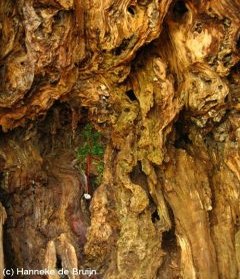 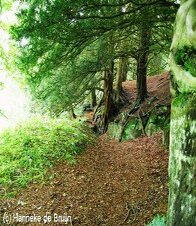 Yew is a wonderful and amazing tree and can reach an age of more than 2000 years old. You can find them on ancient old Churchyard (Especially in England and Wales). They are the symbolism of death and rebirth. Every ancient yew is different and every yew has there ancient vibration.

They are strong trees.

Taxus baccata is a conifer native to western, central and southern Europe, northwest Africa, northern Iran and southwest Asia. It is the tree originally known as yew, though with other related trees becoming known, it may be now known as the common yew, or European yew.

The Yew is a small- to medium-sized evergreen tree, growing 10–20 metres (33–66 ft) (exceptionally up to 28 m/92 ft) tall, with a trunk up to 2 metres (6.6 ft) (exceptionally 4 m/13 ft) diameter. The bark is thin, scaly brown, coming off in small flakes aligned with the stem. The leaves are lanceolate, flat, dark green, 1–4 centimetres (0.39–1.6 inch) long and 2–3 millimetres (0.079–0.12 inch) broad, arranged spirally on the stem, but with the leaf bases twisted to align the leaves in two flat rows either side of the stem, except on erect leading shoots where the spiral arrangement is more obvious. The leaves are highly poisonous.

The seed cones are highly modified, each cone containing a single seed 4–7 millimetres (0.16–0.28 inch) long partly surrounded by a modified scale which develops into a soft, bright red berry-like structure called an aril (A fleshy, usually brightly colored cover of a seed), 8–15 millimetres (0.31–0.59 inch) long and wide and open at the end. The arils are mature 6-9 months after pollination, and with the seed contained are eaten by thrushes, blackbirds and other birds, which disperse the hard seeds undamaged in their droppings; maturation of the arils is spread over 2-3 months, increasing the chances of successful seed dispersal. The seed itself is extremely poisonous and bitter. The aril is not poisonous, and is gelatinous and very sweet tasting. The male cones are globose (having the shape of a sphere or ball), 3–6 millimetres (0.12–0.24 inch) diameter, and shed their pollen in early spring. It is mostly dioecious, but occasional individuals can be variably monoecious, or change sex with time.

It is relatively slow growing, but can be very long-lived, with the maximum recorded trunk diameter of 4 metres probably only being reached in about 2000 years. The potential age of yews is impossible to determine accurately and is subject to much dispute. The major toxin is the alkaloid taxane. The foliage remains toxic even when wilted or dried. The word yew is from Proto-Germanic îwa-, possibly originally a loanword from Gaulish: ivos, compare Irish: ço, Welsh: ywen, French: if. Baccata is Latin for bearing red berries. The word yew as it was originally used seems to refer to the colour brown. The yew is often found in church yards from England and Ireland to Galicia; some of these trees are exceptionally large (over 3 m diameter) and may be over 2000 years old. It has been suggested that the enormous sacred evergreen at the Temple at Uppsala (Sweden) was an ancient yew tree. The Christian church commonly found it expedient to take over these existing sacred sites for churches. The Druids and Celts planted Yew as a symbol of long life or trees of and a link to death. An explanation that the yews were planted to discourage farmers and drovers from letting their animals wander into the burial grounds, with the poisonous foliage being the disincentive, may be intentionally prosaic.

Yew is also associated with Wales and England because of the longbow, an early weapon of war developed in northern Europe, and as the English longbow the basis for a mediaeval tactical system. Yew is the wood of choice for longbow making; the bows are constructed so that the heartwood of yew is on the inside of the bow while the sapwood is on the outside. This takes advantage of the natural properties of yew wood since the heartwood is able to withstand compression while the sapwood is elastic and allows the bow to stretch. Both tend to return to their original straightness when the arrow is released. A special use of the yew is for topiary garden sculpture, a use not uncommon for many of the more elaborate gardens of England and Scotland. The precursors of chemotherapy drug Paclitaxel can be derived from the leaves of European Yew. The yew tree played an important role in the formation of human culture and consciousness. It provided wood for shelter, tools and weapons, foliage and bark for every medicine bag. Its greatest influence on culture, however, was its myriad spiritual associations with the goddess, the grave, afterlife and immortality. Although the yew tree was revered in nearly every culture of the northern temperate zones, yew trees were destroyed for their utility. Gone from Greece and Rome by the time of Christ, gone from Europe by the 17th century 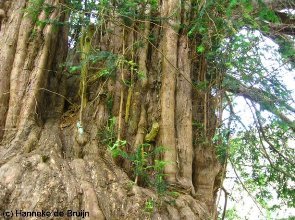 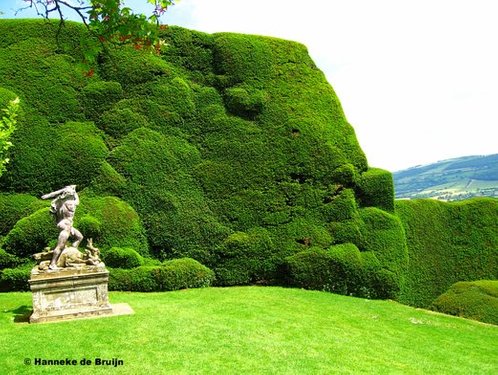 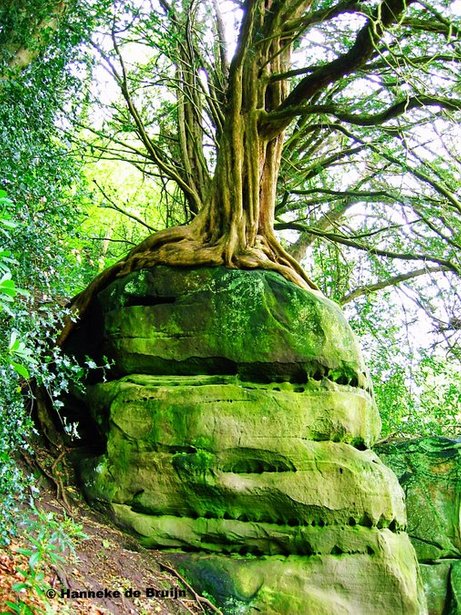 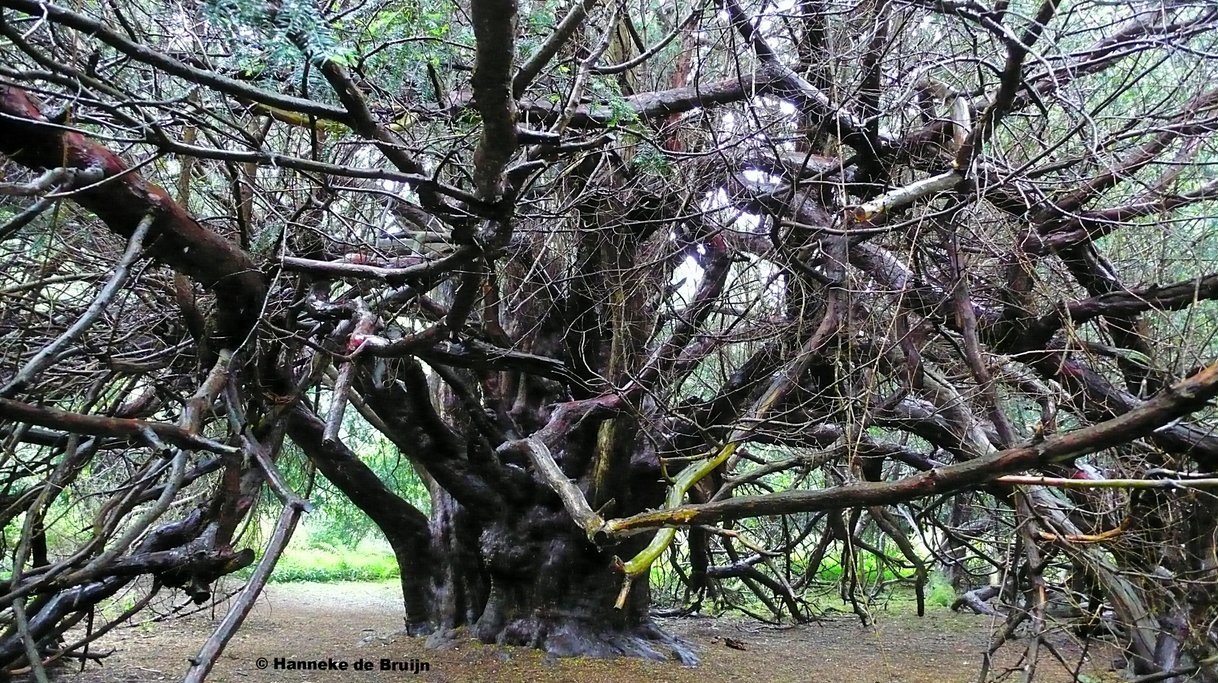 A huge yew forest,.. What to think about that? Something like Sherwood Forest in Nottingham? All guided with fences and signs around the trees…? Non of it. First you have to find the right place to the forest (no signpost). (The NNR is 5km North west of Chichester. Leave the A286 at Mid Lavant and continue west, past West Stoke, to the NNR car park. Parking Place: 50°52'21.00"N, 0°49'46.20"W) Then, by the car park, an half an hour walk (just straight on) over an Public foothpath. Then you finally come to the edge of an forest and you find a big billboard with Kingley Vale on it and an information hut. When you walk further on you soon see the first Giant. Girth 32 feet. And the more you enter the wood, the more you see. And not one or three… no Tens of it, what I said, Hundreds of Them!! Just in the forest, with public footpath, without fences and all the like. You can walk in and around any tree, and all of them amazingly ancient old. They stand there in different stadium of old age, being beautiful. The one blown of just fallen over and laid where he was fallen, the other standing proud upright. All of them more or less 2000 years old. It was very cool to walk, slink actually, around these old giants. On every corner of the path another beautiful giant comes in sight. I kept on taking pictures, despite the pouring rain. Further on the Yew wood stretches its self on the hills. Not as old, but totally intact. The twilight started already and the chalk ground under the dense Yew Forest glooms spooky in the forest, while an Owls calls in the distance... 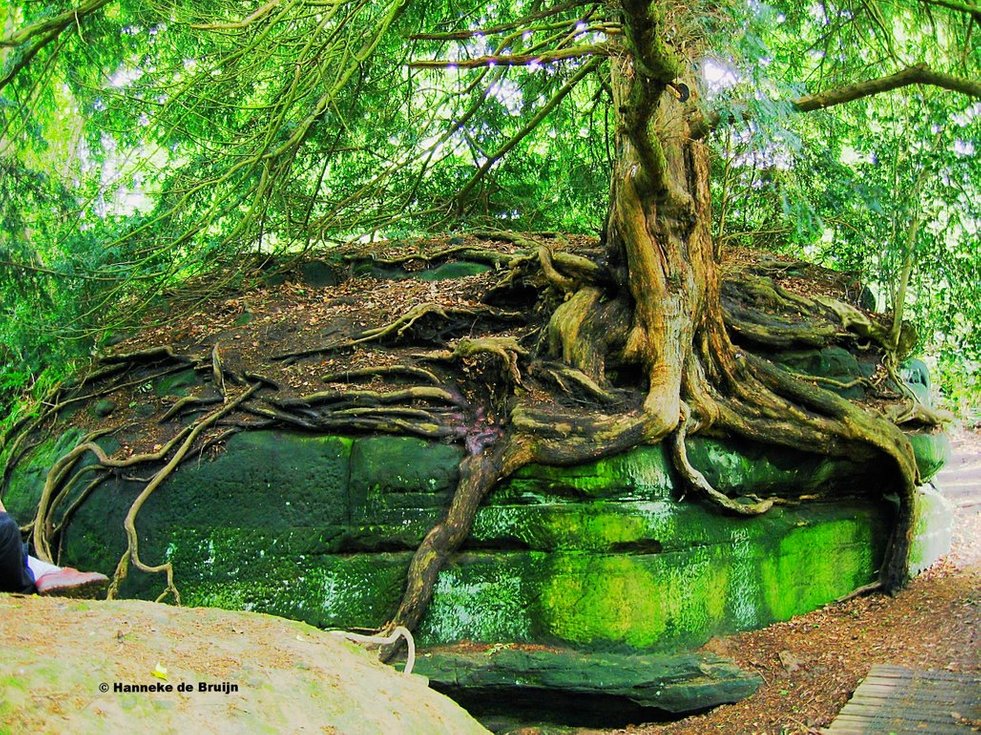 When I read the book Meetings with Remarkable Trees by Thomas Pakenham, I was thrilled when I saw a picture of this Yew trees. I want to see that! So off I went 5 years after I read the book. Wakehurst place In Engalnd. It is a part of the Royal Botanical Garden in Kew. And is a huge garden. 200 acres on a slope of a hill. In a corner of the garden there is the place were the yew trees stands. Trees that grows ON limestone... When I saw the first trees, amazingly growing, I was tiptoeing further through the forest and gape in amazement at the trees. I reminds me at the ancient old Temples in Indonesia that were overtaking by Ficus trees. Only smaller. Wonderful growing of trees and roots. Very mysteriously beautiful. The nature is wonderfully great! I have Awe for it. 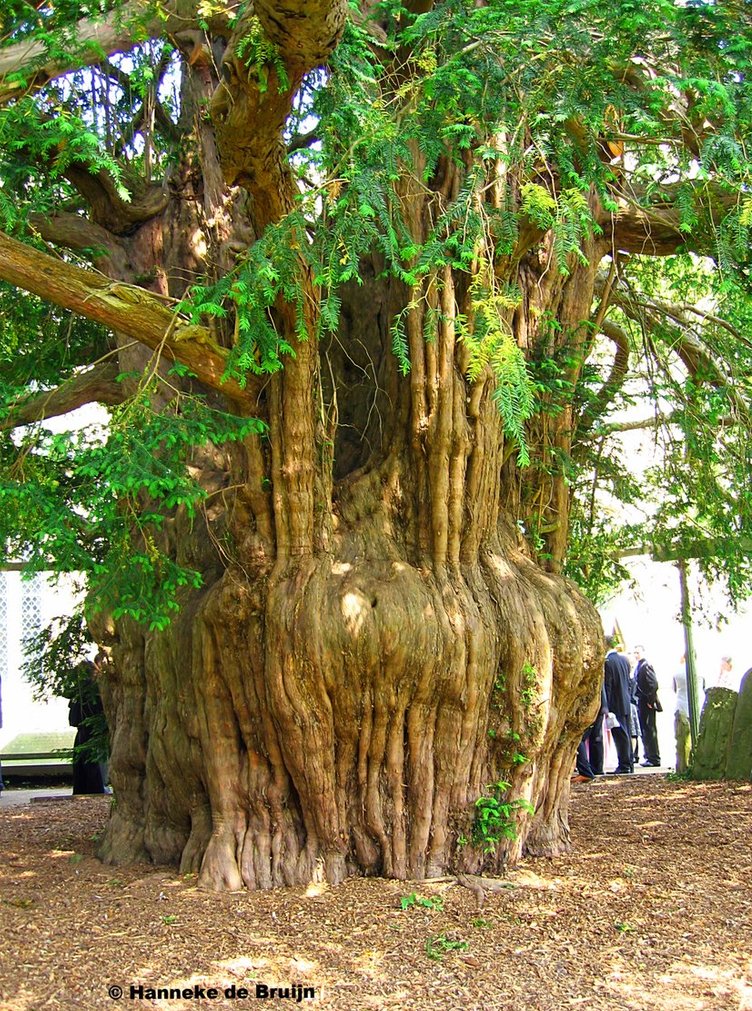 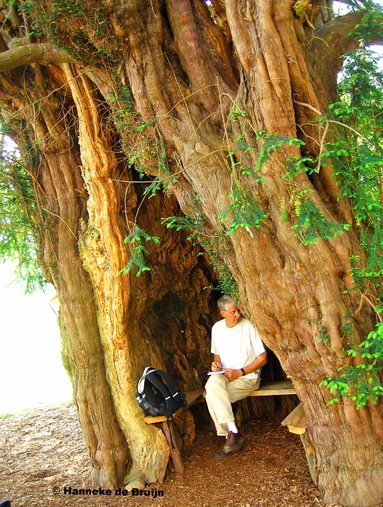 When we met this tree (Found in a book Meetings with remarkable trees by Thomas Pakenham) there were just guest of a wedding ceremony waiting for the bride. They were exciting and nervous. The tree was bigger than I expected. More than 32 feet (10 meter) in girth and more or less 20 meter high. The tree was completely hollow inside. And inside the tree there were some benches were you can sit. When I sat on it and look at the structure of the tree inside, I saw a mouse finding his way trough. Next to the tree stand an old church (St. Bartholomew's Church), from the 13e and 14e century. A Central block tower with the ship of the church left and right of it. It is wonderful to see that the tree is respected and that there an old tradition is been kept: hanging ribbons on the tree for luck. 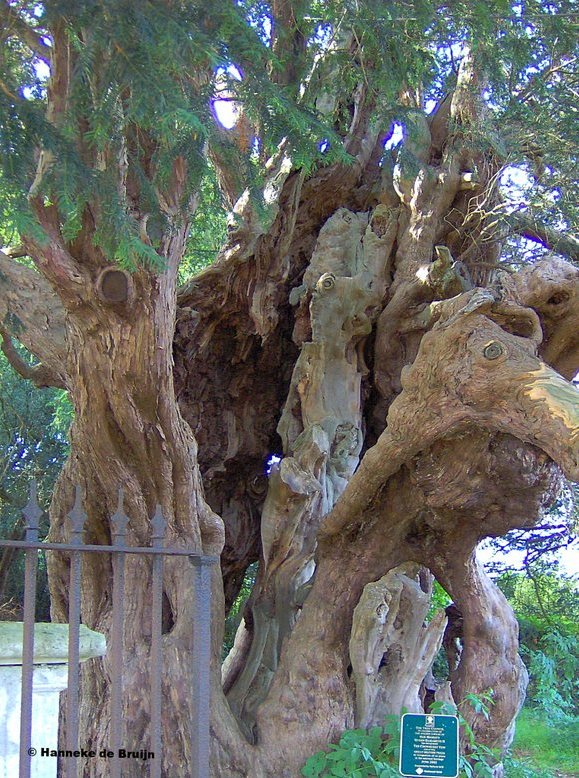 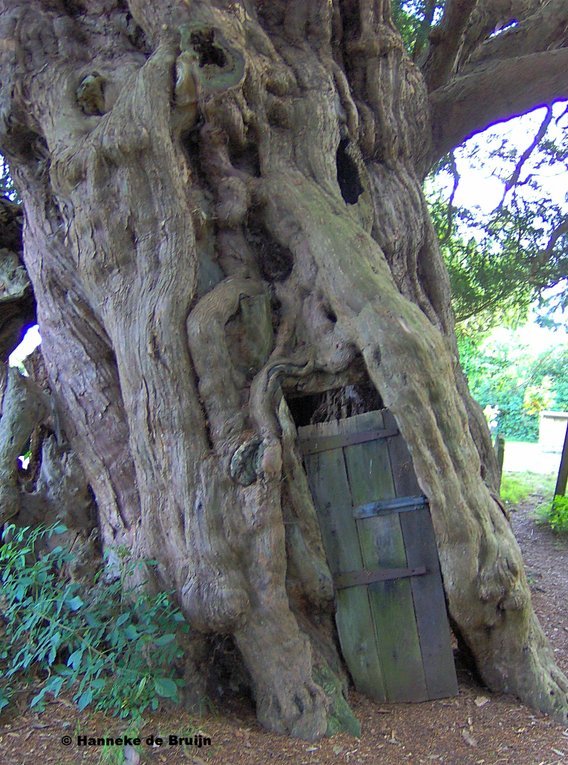 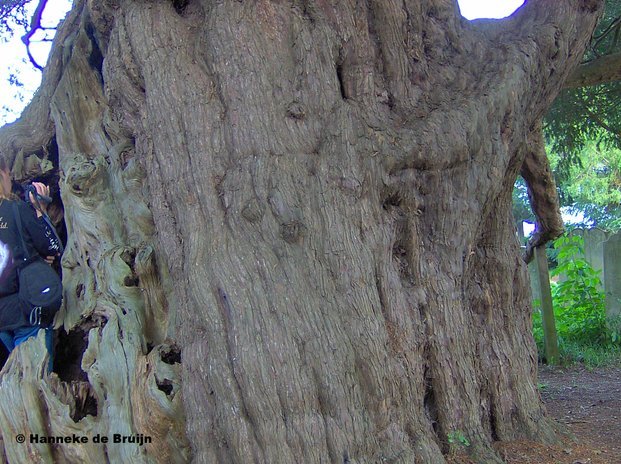 Inspired by the book: Meetings with remarkable trees by Thomas Pakenham, I want to visit this tree. 4000 years old, you can not imagine what it’s like, until you met this tree. Such an enormous Yew, totally hollow inside and with a little door in the trunk…. The tree has a girth of 39 feet (12 meter) and is not completely round and you didn’t have to enter the door the get inside the tree. Every where are cracks and holes in the trunk, but that makes just more exciting. The hollow space is 6 feet (1.80 meter) and in the early days there ware tables and chairs inside. The tree looks fabulous and healthy. The grow process of the trees is inside the bark and have a tremendous way to renew them self by growing new roots and bark inside. You can clearly see that this Yew does that. His true age you can never tell because of his hollowness, but 4000 year is plausible. The tree and the graveyard breathe an ancientness that comes straight from the middle ages. Transported back in time. Next to the tree there stands an old Church (12 century, St George’s Church) small but beautiful. The tree is older than the church. On a small green sign next to the tree you can read the tree is on a list of ancient trees of the Tree council. Very good of them. This Yew is the oldest yew I ever met.