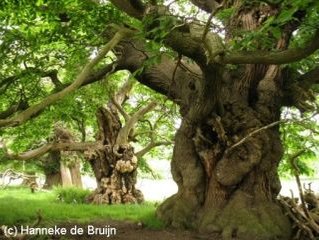 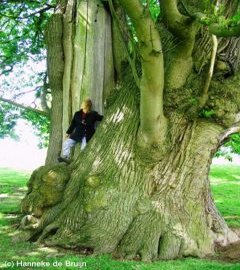 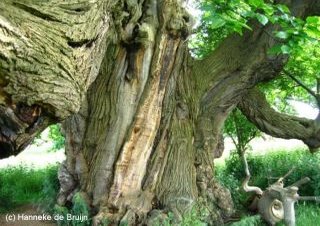 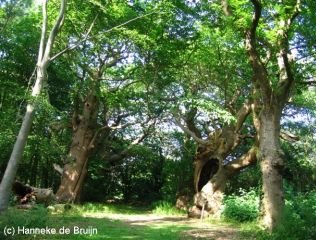 The Sweet Chestnut is famous because of his eatable nuts. This trees can grow until they are enormous giants. They can reach an age of minimum 1000 years. They can handle everything. Thunder lightning, Fire, Storm, And still they grow. They are much a live and very powerfull.

They are strong but still flexible trees.

The Sweet Chestnut (Castanea sativa, family Fagaceae), also known as the Spanish Chestnut, Portuguese Chestnut or European chestnut, is a species of chestnut originally native to south-eastern Europe and Asia Minor. It is a medium-sized to large deciduous tree attaining a height of 7,87 -114,83 ft (20-35 cm) with a trunk often 6,56 ft (2 m) in diameter. The oblong-lanceolate, boldly toothed leaves are 6,30 -11,02 inch (16-28 cm)long and 1,97– 3,54 inch (5-9 cm) broad. The age can reach from 500 till 2000 years old. There is a famous Sweet chestnut on Sicily. In the place Sant’ Alfio. The tree is probably 2000 – 4000 years old. Sweet Chestnut is in bloom around June - July at the end of young shot. Flowering and fruit set start from the fourth year of the tree/shrub. The male flowering is the most striking. Male flowering exists in long catkins. Which is a string that carrying the pollen that are star-shaped build. There are much male flowering with respect to the less occurring the female flowering. The female flowering sits on the foot of the male catkins. The male flower catkins often remains on the ripe nuts. The flowers of both sexes are borne in 3,94 -7,87 inch (10-20 cm) long, upright catkins, the male flowers in the upper part and female flowers in the lower part. They appear in late June to July, and by autumn, the female flowers develop into spiny cupules containing 3-7 brownish nuts that are shed during October. Some species ("Marron de Lyon", "Paragon" and some hybrids) produce only 1 large nut, rather than the average 2 to 4 nuts of edible size. The bark often has a net-shaped (retiform) pattern with deep furrows or fissures running spirally in both directions up the trunk.

The tree requires a mild climate and adequate moisture for good growth and a good nut harvest. Its year-growth (but not the rest of the tree) is sensitive to late spring and early autumn frosts, and is intolerant of lime. Under forest conditions it will tolerate moderate shade well. Sweet Chestnut is widely cultivated for its edible seeds, also called nuts. As early as Roman times it was introduced into more northerly regions, and later was also cultivated in monastery gardens by monks. Today, centuries-old specimens may be found in Great Britain and the whole of central, western and southern Europe. They are widely popular in Turkey, Portugal, France, Hungary, Italy, Croatia, Bosnia and particularly in Corsica. The raw nuts, with their pithy skin around the seed, are somewhat astringent. That skin can be relatively easily removed by quickly blanching the nuts after having made a cross slit at the tufted end. Once cooked they become delicious, developing, when roasted, a sweet flavour and floury texture not unlike sweet potato. The cooked nuts can be used by confectioners, puddings, desserts and cakes or eaten roasted. They are used for flour, bread making, a cereal substitute, coffee substitute, a thickener in soups and other cookery uses, as well as for fattening stock. A sugar can be extracted from it. The Corsican variety of polenta (called pulenta) is made with sweet chestnut flour. A local variety of Corsican beer also uses chestnuts. Leaves infusions are used in respiratory diseases and are a popular remedy for whooping cough. It is much used in homeopathy and in Bach remedies for which the key words are 'Extreme mental anguish', 'Hopelessness' and 'Despair'. A hair shampoo can be made from infusing leaves and fruit husks.

This tree responds very well to coppicing, which was commonly practiced until fairly recently in Britain, and produces a good crop of tannin-rich wood every ten years or so. The tannin renders the young growing wood durable and resistant to outdoor use, thus very suitable for posts, fencing or stakes. The wood is of light colour, hard and strong. It is also used to make furniture, barrels (sometimes used to age balsamic vinegar), and roof beams notably in southern Europe (for example in houses of the Alpujarra, Spain, in southern France and elsewhere). Due to older wood's tendency to split and warp badly, and acquiring a certain brittleness, it is not frequently used in large pieces. It is also a very good fuel. Tannin is found in the following proportions on a 10% moisture basis: bark (6.8%), wood (13.4%), seed husks (10 - 13%). The leaves also contain tannin. A tree grown from seed may take twenty years or more before it bears fruits, but a grafted species such as "Marron de Lyon" or "Paragon" may start production within five years of being planted. Both the latter species bear fruits with a single large kernel, rather than an average of two to four smaller kernels. 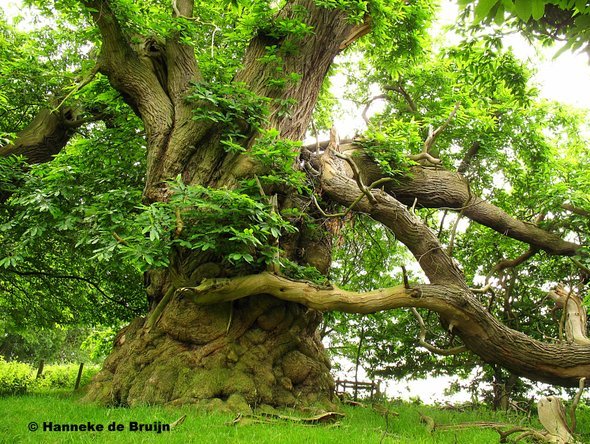 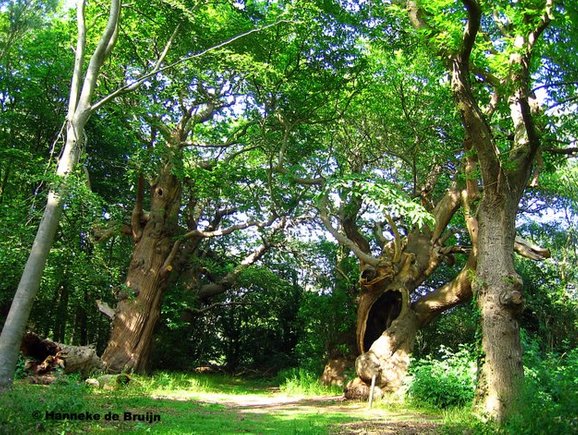 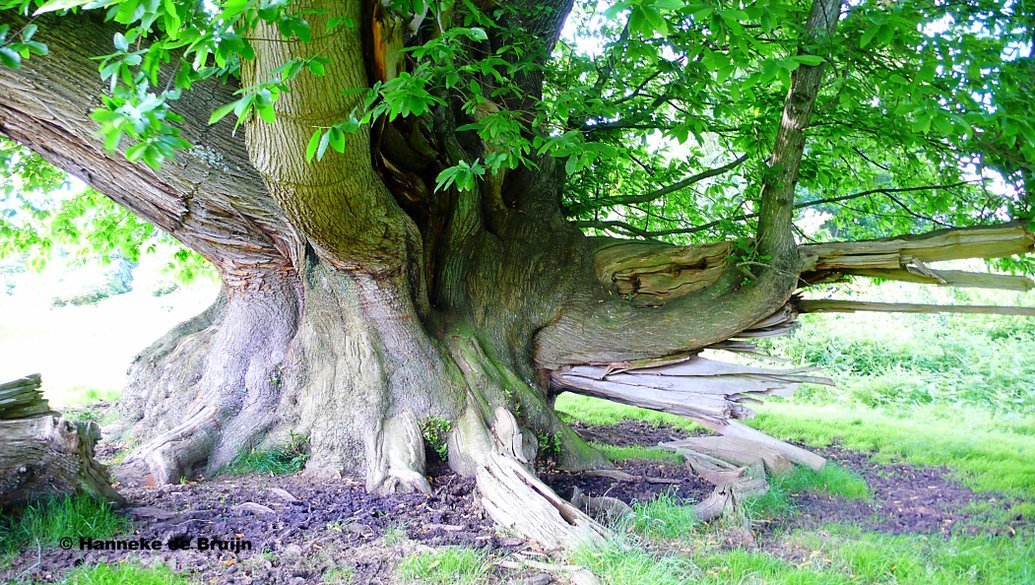 The story of this tree.

We met this tree in the Cowdray park (Midhurst, Sussex. GPS: 50°59'28.64"N, 0°42'0.60"W). A huge estate park. When we enter the meadows we saw an old Oak from the Victorian times and a group of Limes. We didn’t see this tree when we met the lime tree (See Lime). We wander off (because of the bulls in the field) and we were driven by intuition to walk over the hills. And when we saw the tree, we know why. In the corner of the field stand this Sweet Chestnut. It is an amazing and wonderful tree. Old, damaged but still a life and growing. A cathedral of a tree. He had in the past a huge arm of a branch (as big as a man), but he weight was to heavy and has broken off. We stood in front of this tree in amazement. We almost want to burn a candle with this tree, as you burn a candle in a church. With open arms this tree invited you. 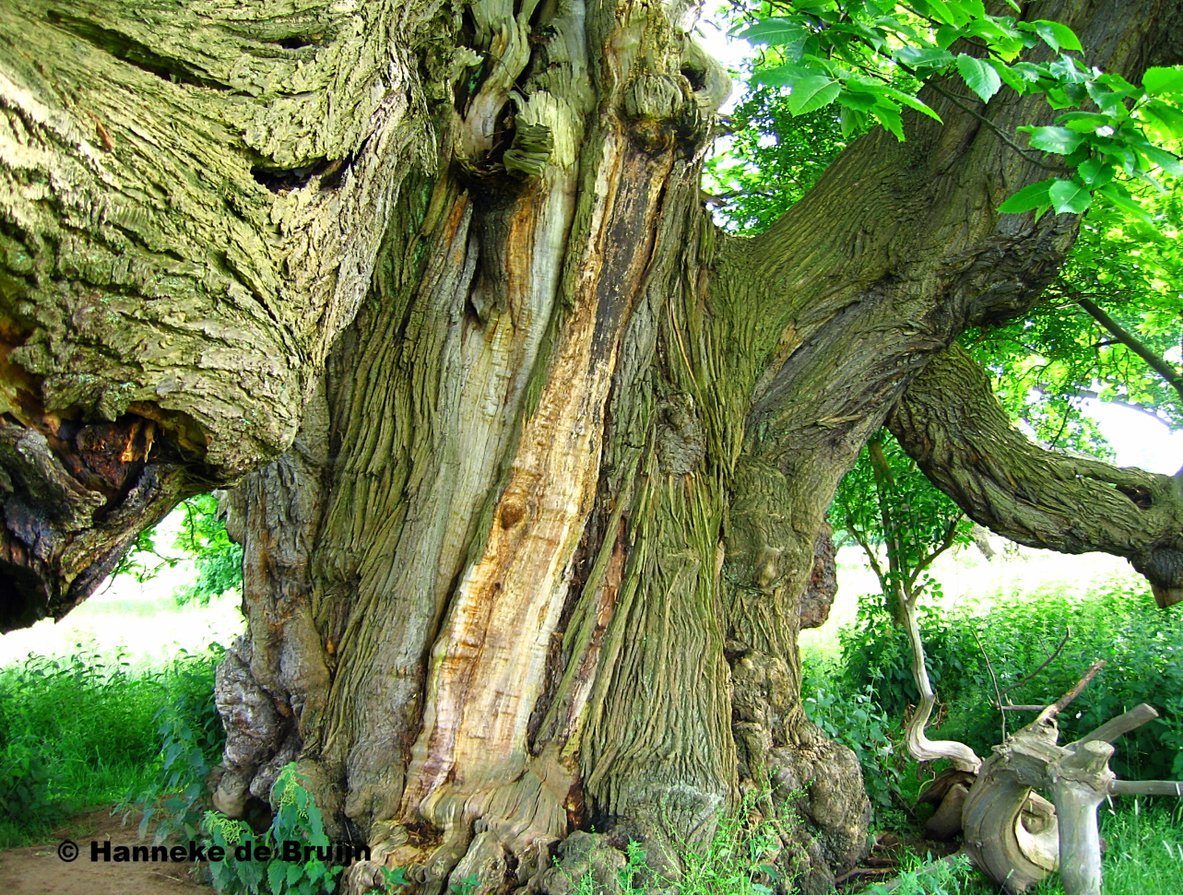 I read in a book (Meetings with remarkable trees by Thomas Pakenham) that there was a Very old Oak in Fredfile park,(GPS: 51°13'19.72"N, 1°13'54.96"O) and I want to visit him. In the time without navigators in the car it was a great adventure to find this small hamlet. Finally we found it. We parked the car and walk via a public footpath to the park, we thought. A privet park, unknown to us. But we ended at the far end of the the park, in the field, and to our surprise we find this very very old Sweet Chestnut. He is more than 10 m in girth (we measured him ourselves). There are some limbs broken off the tree and he has seen storms, but he looks very a life and healthy. There are even badger holes under the roots of the trees. He looks fabulous and healthy. This tree is our very first encounter with such Giants. It’s amazing and breath taking. It really moves you. The example that nature overcome it all. 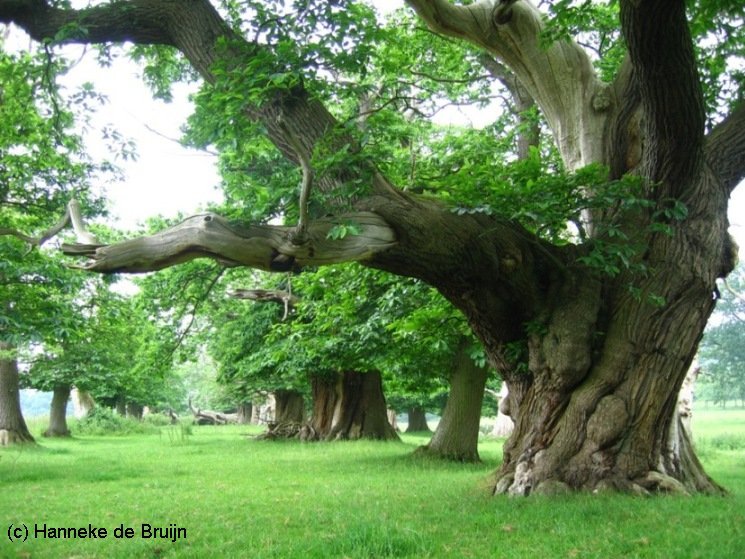 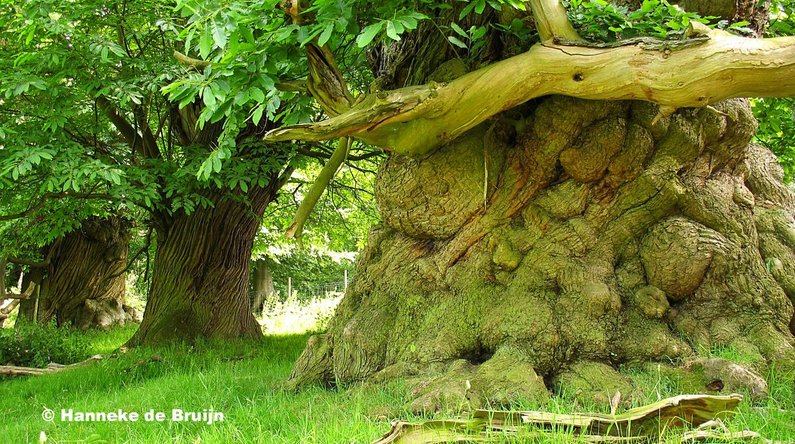 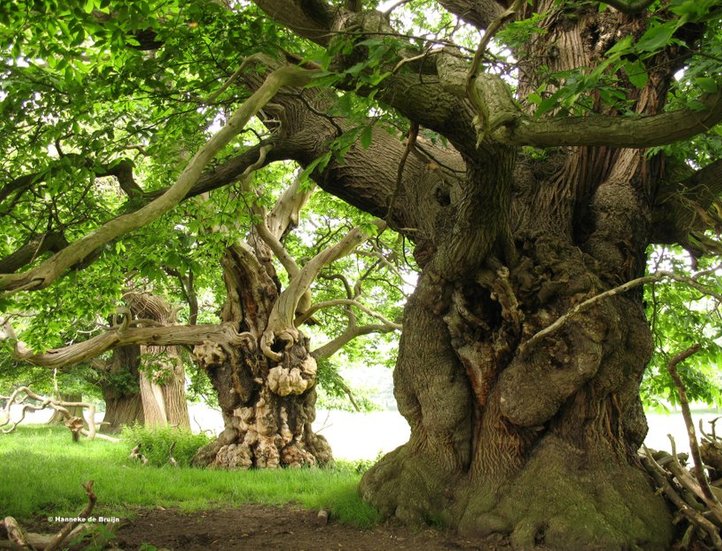 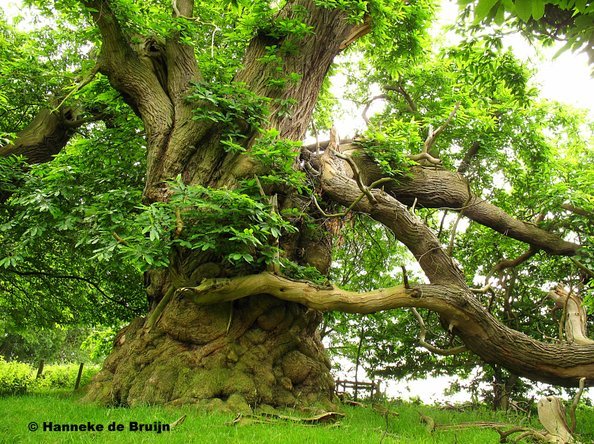 The story of this tree.

From a tree book I’ve read (The Heritage Trees of Britain and Northern Ireland, Jon Stokes and Donald Rodger) I know that there were some old Sweet Chestnuts on the estate Croft Castle near Yarpole. When we enter the grounds, the estate field was enormous. We had to ask were to find the Sweet Chestnuts. And in a corner we found a 3 double Avenue of a Mile long with very old sweet chestnuts! The one older than the other. Some had fallen over already, what gives an ancient impression. Nature that makes art. Spectacular to walk amongst this old giants... The story goes that these trees were planted after the Spanish Armada to impress the ships that had laid for the coast. It could be. Then they are very Old! The Sweet Chestnut is not native to Great Britain. The Romans brought it to their Northern Region for the nuts. 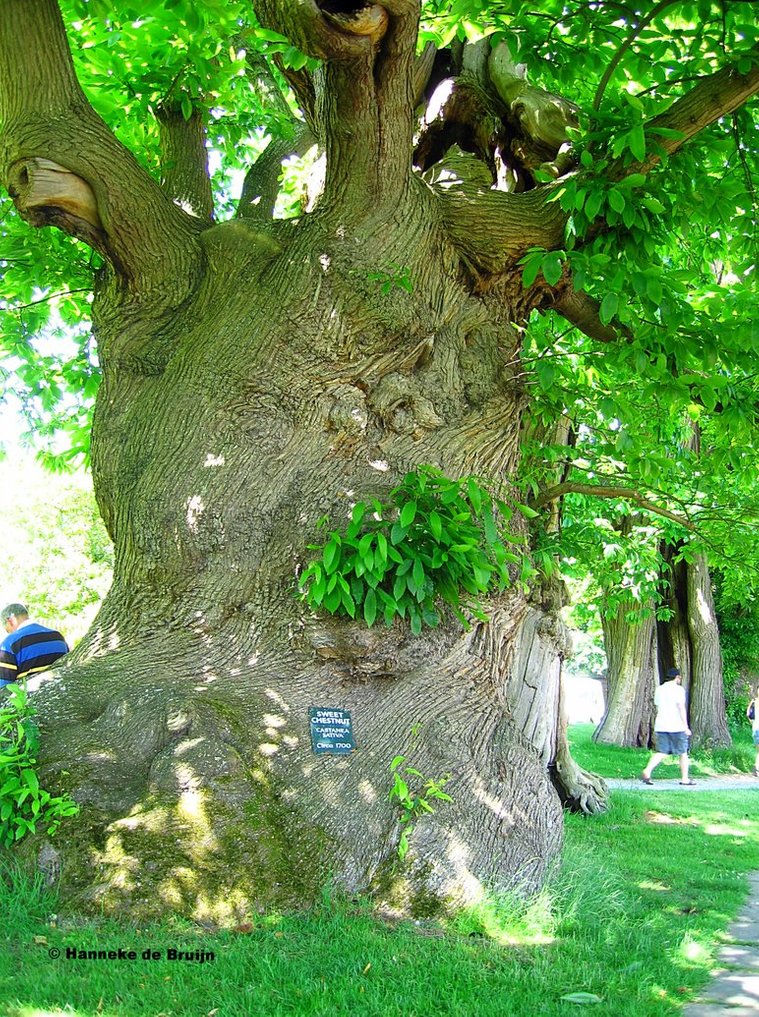 Hertsmonceux, Essex. Back of the garden

Hertsmonceux, Essex. Back of the garden

In a book I had, I read about Sweet chestnuts in Herstmonceux. Then you might think it´s a bout 1 or maybe 2 trees... But when we arrive ay the ´scene´it was a complete Allee/lane with big old sweet chestnuts! All with a little note on it when it was planted.. around 1700.. They are massive and old..!! ± 8 meter in Girth. We were ashtonished! Next to the old Sweet chestnut was a real castle with moat and all, and now a Univercity was held in it. The grounds were pretty and old too. At the back of the garden were more old Sweet chestnuts, same age, but more in a state of decay-ing, but beautiful nontheless....