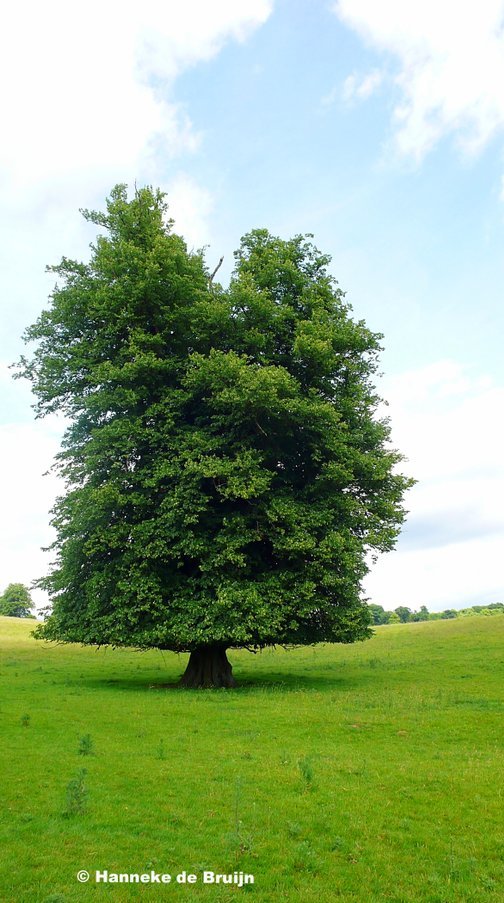 We met this tree on a meadow by an ancient old Goldmine in Wales (GPS parking: 52°2'42.62"N, 3°57'5.94"W). In the meadow were sheep’s and other cattle. And there were a group of Lime trees. Standing there with all the space they needed, and close by a small river. The cattle eat the tender and palatable leaves of the young shoots. Normally they grow near the base of the trunk, now the “move” upwards, out of reach of the grazing cattle. Which resulted in a massive crown that it looks like a building of leaves. The tree was at least 98,43 ft (30 m) high. The lime produced enormous mass of nectar. You could smell it. He like it to stand it wet places. Never seen a huge lime as this. 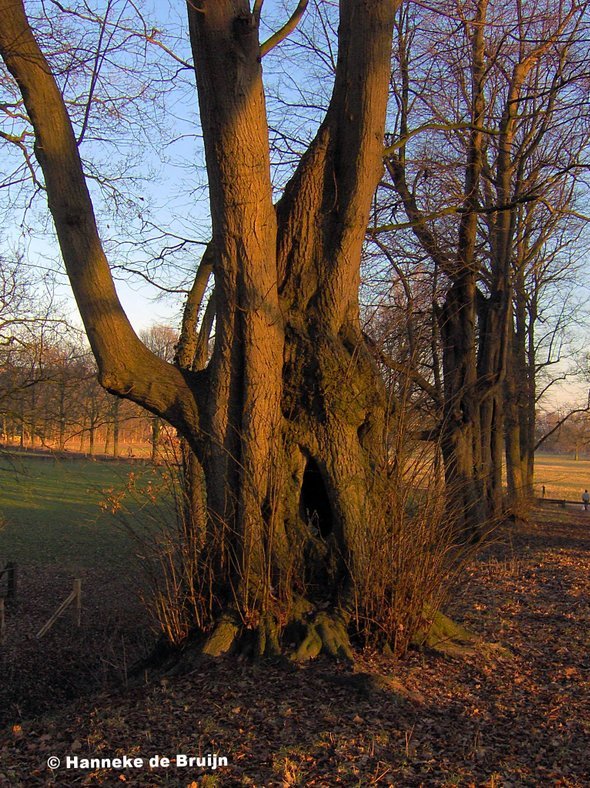 For The Netherlands this is an old lime tree. 100 a 150 years old. This tree stand on an ancient old mould of earth and sand, surrounded an old fortified house. When we met this tree, it was mid-winter and the sun was already in the west. That gives a nice atmosphere on al this old trees. 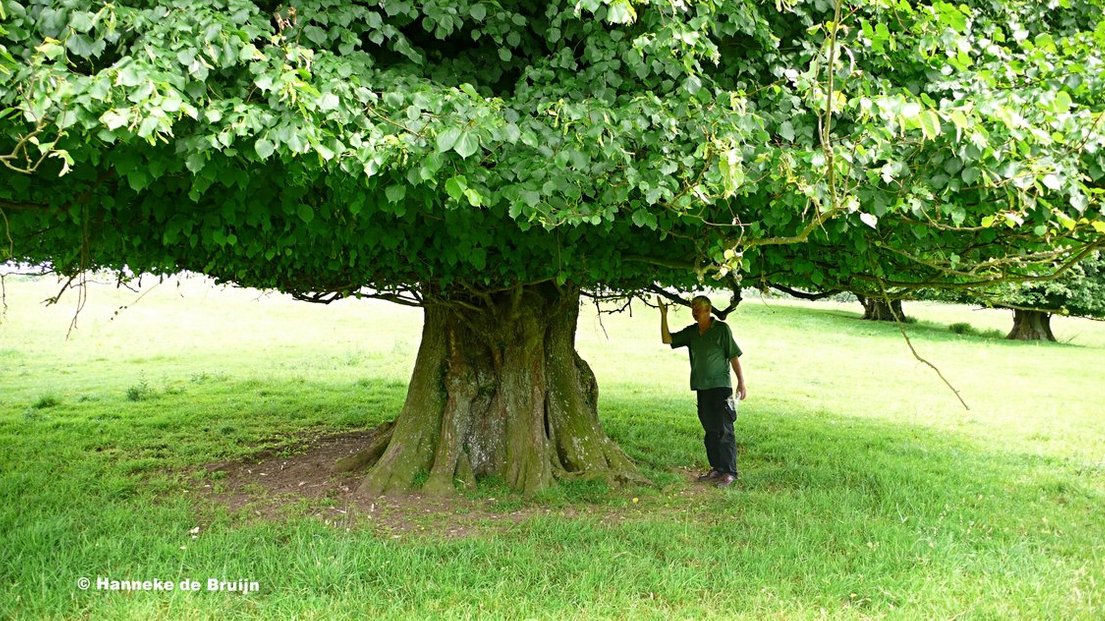 Inspiration to visit this Park was a book: The Heritage Trees of Britain and Northern Ireland, Jon Stokes and Donald Rodger. Cowdray park isn't signposted. It is near Midhurst, take the A272 from Midhurst to Petworth. 1 mile after the village and the Ruins there is an lake on the leftside of the road. Park the car there and take the footpath North West. It is a enormous park (16.000 acres, 6.474,97 hectares) in the County Sussex. A huge meadow with small hills and with cattle grazing on it.

After the adventure to find the park, finally found it. On the border of the car park there is an meadow where different kind of tree species grow. The meadow stress it self over the rolling hills till the horizon. As you enter the meadow an old oak is clearly in sight. The trunk is very low and she is completely hollow. The crown looks healthy. The tree is the Queen Elisabeth I Oak. Named after the legend that that Queen has know the tree. If that's true, she really is an veteran. And she looks like an old lady indeed. Further up the meadow were Lime trees and not just. You could see the are enormous and of a good age (at least 400 years) and very high (30 meter at least). The crown and canopy is very dense (of foliage). It is clearly seen that the cattle likes the lime leaves. The underside of the canopy is totally flat. All eaten. Young lime leaves are very palatable. The tree makes young shoots at the base of the tree, naturally. But because there are all eaten during the centuries, the tree moves that natural reaction: in making the young shoots in the canopy itself. That makes it a wood-like inside the canopy.... fascinating. Inspired by the tree we wander off on the meadow wondering what kind of giants we met further on.... (see Sweet Chestnut). 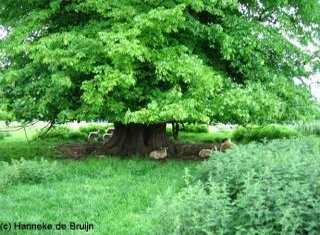 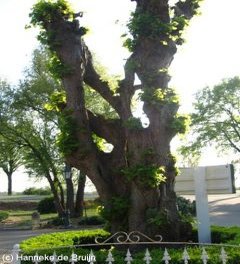 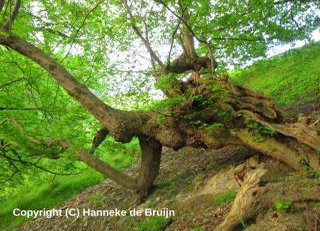 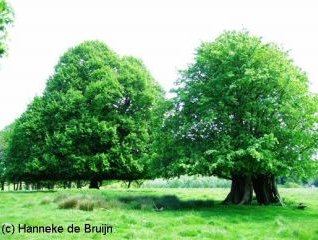 The Lime or Linden

Lime is a beautiful soft tree. Soft leaves, soft light-green light under the canopy, soft wood and a soft character. The Lime was a sacred tree by the Celts and the Germane. The goddess Freya was believed to live in the tree. The spirit of the Lime tree was a protector for houses, wells and churches. The tree is a valuable of insects like bees and bumblebees. A lime tree standing close to water will give an enormous amount of nectar. Al Lime tree can live very long. At least 1000 years. The trees are suitable for pruning.

They are beautiful, versatile trees.

The lime is a broadleaf of the genus Tilia. The species of this genus are spreading in the Northern Hemisphere in Europe, North-America en Asia. The leaves are obliquely heart-shaped, dark green above, paler below, from 2 1\2 to 4 inches long and sharply toothed. The yellowish-white flowers hang from slender stalks in flattened clusters. They have five petals and five sepals. The original five stamens have each developed a cluster, and there is a spoon-shaped false petal opposite each true one. Within the genus there are 25 species. In the Benelux there are mostly the species: Basswood or American Linden (Tilia americana var. americana) Small- leaved lime (Tilia cordata) (Tilia europaea) Large- leaved lime (Tilia platyphyllos) Silver Lime or Silver Linden (Tilia tomentosa) Common Lime (Tilia europea (x)) Amur Lime or Amur Linden (Tilia amurensis).

The Tilia Europaea is a species cross between Tilia cordata and Tilia platyphyllos. The species known different varieties. Tilia cordata and Tilia platyphyllos are natural spreader in the Benelux. Lime is know as the biggest broadleaved tree, his biotope is naturally in valleys of little streams. The Lime Tree can be grow very old. The Lime tree can be reaches a height of at least 49,21 till 98,43 ft (15 till 30 m) depending on the variety. The wood is useful for small articles not requiring strength or durability, and where ease in working is wanted: it is specially valuable for carving, being white, close-grained, smooth and tractable in working, and admits of the greatest sharpness in minute details. It is the lightest wood produced by any of the broad-leaved European trees, and is suitable for many other purposes, as it never becomes worm-eaten. On the Continent it is much used for turnery, sounding boards for pianos, in organ manufacture, as the framework of veneers for furniture, for packing cases, and also for artists' charcoal making and for the fabrication of wood-pulp.

The Linden is to be recommended as an ornamental tree when a mass of foliage or a deep shade is desired. The tree produces fragrant and nectar-producing flowers, the medicinal herb lime blossom. They are very important honey plants for beekeepers, producing a very pale but richly flavoured monofloral honey. The flowers are also used for herbal tea, and this infusion is particularly popular in Europe.

The inner bark or bast when detached from the outer bark in strands or ribbons makes excellent fibres and coarse matting, mostly used by gardeners, being light, but strong and elastic. Fancy baskets are often made of it. In Sweden, the inner bark, separated by maceration so as to form a kind of flax, has been employed to make fishing-nets.

The Lime can be coppiced and trimmed in a special “vertical raster”. Which is: cutting of most of the branches and put the vertical and horizontal branches as a kind of raster and put them on a frame. The coming year they cut back all the new shoots that grows upwards. After years the trees produces a cool green wall of shade. They used this kind of pruning of lime trees in Holland by old Farm houses. To keep the houses cool.

By the Celts the Lime was a spiritual tree. Even in the later centuries the tree is a “Good Omen/ tree”. Marriages were held under the tree; both thumbs of the lovers were pressed in the bark of the tree.

This lime species will occur in the wild in Europe. It is an ornamental tree in towns. The tree can reach a height of 98,43 ft (30 m). His crown has a close, dome shaped form. When the tree is young the bark has a smooth greyish colour. When he is mature the colour darkens and the bark get fissured. The twigs are red above and greyish underneath. The buds are smooth, gleaming red and egg shaped. The small-leaved lime have heart- shaped leaves of 1,57 - 2,76 inch (4-7 cm) x 1,18 -1,97 inch (3-5cm) in size. The leaves have a toothed edge. The leave had a yellowish stalks. The leave is on the upside dark gleaming green, on the downside paler. The leaves a red-brown tufts of hair on the underside, at the junction of the veins, with stalks unusually as long as the leaf itself. The flowers are white and forms dense groups of four up to fifteen flowers. They have a pale green flyleaf of 2,36 in (6 cm) long. The fruits are 0,2362 in (6 mm) long small bulbous and ribbed.

Small leaved limes are characteristic of ancient woods due to a limited ability to reproduce. It set fertile seeds only in the warmest years and any seedling that do emerge tend to be eaten as they are very palatable.

Pollen diagrams, based on pollen finds in for example marshes, show to that the even lime occur in the period of the Atlanticum. In this period the lime grows on organic, fertile soil and was the dominant tree together with the Hazel. Much more that the Oak.

Of this Atlantic lime forest can you still find on the island Jutland in Denmark and in the forest of Biaùowieýa in Poland. 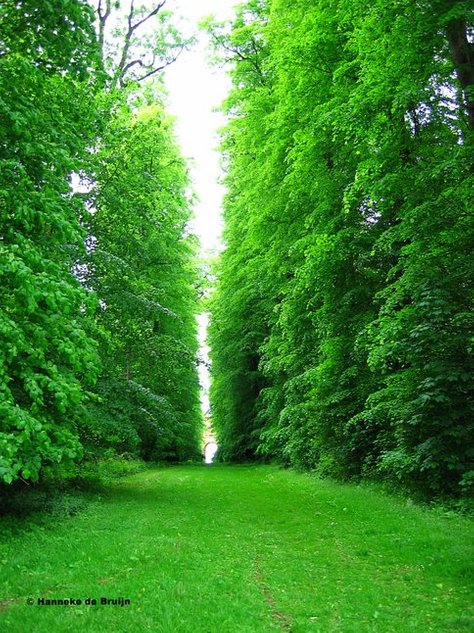 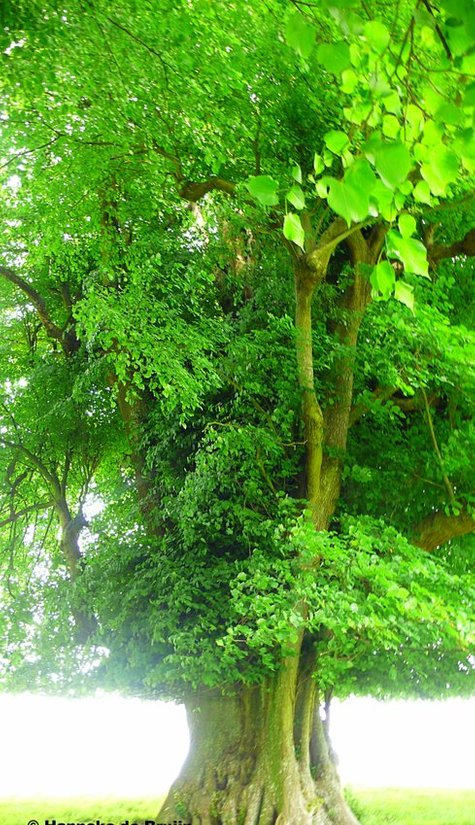