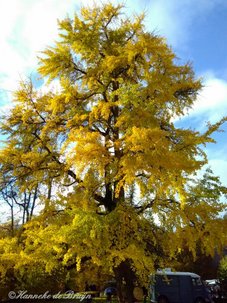 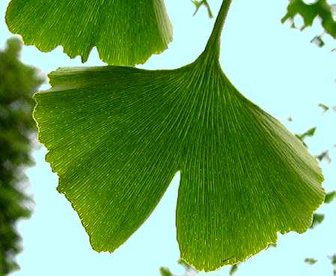 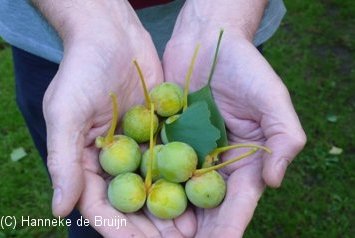 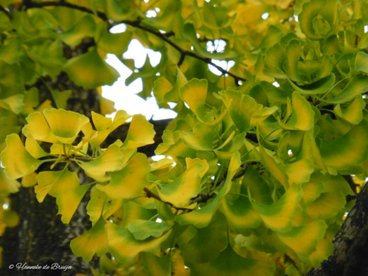 If you are talking about ancient old trees the Ginkgo ultimate. Not that he can reach an high age, but because he is a living fossil. He isn’t changed since the time of the dinosaur. Every time as I see the Ginkgo, I am happy.

They are pre-historic trees.

Ginkgo, frequently misspelled as "Gingko", and also known as the Maidenhair Tree after Adiantum, is a unique species of tree with no close living relatives. The ginkgo is classified in its own division, the Ginkgophyta, comprising the single class Ginkgoopsida, order Ginkgoales, family Ginkgoaceae, genus Ginkgo and is the only extant species within this group. It is one of the best-known examples of a living fossil, because Ginkgoales are not known from the fossil record after the Pliocene.

The ginkgo is jammed between a conifer and a broad leaf trees, it is none of both. The relationship of Ginkgo to other plant groups remains uncertain. It has been placed loosely in the divisions Spermatophyta and Pinophyta, but no consensus has been reached. The ginkgo know both female and male trees. Worldwide there are less female Ginkgo trees than male. This is because people selected male trees for cultivation. As the female tree set their fruit they spread an unpleasant fragrance. The difference between both sexes is only seen when the tree is in bloom. The tree grows irregularly and conical, and becomes approximately 40 meters high. In the Netherlands and Belgium are much cultivated trees that grows not as high as in the wild.

Ginkgo´s are very large trees, normally reaching a height of 20–35m (66-115 feet), with some specimens in China being over 50m (164 feet). The tree has an angular crown and long, somewhat erratic branches, and is usually deep rooted and resistant to wind and snow damage. Young trees are often tall and slender, and sparsely branched; the crown becomes broader as the tree ages. During autumn, the leaves turn a bright yellow, then fall, sometimes within a short space of time (1–15 days). A combination of resistance to disease, insect-resistant wood and the ability to form aerial roots and sprouts makes ginkgos very long-lived, with some specimens claimed to be more than 2,500 years old: One of the oldest

Ginkgo trees is in Shanghai, within the Yuyuan Garden; it is four centuries old. A 3,000 year-old ginkgo has been reported in Shandong province in China. The 'Fruits' of the ginkgo are botanically the seeds of the Ginkgo. Because the seed skin is fleshy, it seem like fruit. The seeds are apricot shaped with silvery glow (hence the name Ginkgo: gin = silver; kyo = apricot).

Female plants do not produce cones. Two ovules are formed at the end of a stalk, and after pollination, one or both develop into seeds. The seed is 1.5-2 cm long. Its fleshy outer layer (the sarcotesta) is light yellow-brown, soft, and fruit-like. It is attractive in appearance, but contains butanoic acid and smells like rancid butter (which contains the same chemical) or feces when fallen. Beneath the sarcotesta is the hard sclerotesta (what is normally known as the "shell" of the seed). The fertilization of ginkgo seeds occurs via motile sperm, as in cycads, ferns, mosses and algae. The sperm are large (about 250-300 micrometres) and are similar to the sperm of cycads, which are slightly larger. Although it is widely held that fertilization of ginkgo seeds occurs just before or after they fall in early autumn, embryos ordinarily occur in seeds just before and after they drop from the tree.

The contents of the seeds are considered in China and Japan as delicacy, to which a numerous beneficial purposes for the healing functions of your body. Since Ginkgo seeds are not protected by an ovary wall, it can morphologically be considered a gymnosperm. The apricot-like structures produced by female ginkgo trees are technically not fruits, but are the seeds having a shell that consists of a soft and fleshy section (the sarcotesta), and a hard section (the sclerotesta). The word biloba means two lobs and refers to the form of fan . The leaves are unique among seed plants, being fan-shaped with veins radiating out into the leaf blade, sometimes bifurcating (splitting) but never anastomosing to form a network. Two veins enter the leaf blade at the base and fork repeatedly in two.

The leaves are usually 5-10 cm (2-4 inches), but sometimes up to 15 cm (6 inches) long. The old popular name "Maidenhair tree" is because the leaves resemble some of the pinnae of the Maidenhair fern Adiantum capillus-veneris. During the tertiary Ginkgo was covering almost the whole northern hemisphere. During our era the tree was though to be extinct. Probably the tree has returned around 800 with the Buddhism from China to Japan. There, the tree was grown at temples, what the nickname gives as temple tree. In 1730, the ginkgo have been brought to Europe and in 1784, to America. The Ginkgo tree occur in the wild still only in the mountain range of the province Chekiang (in the east of China).

The girth of the trunk of the older trees may become large because of secondary growth. The tree usually loses its central leader and gives rise to several vertical trunks ("basal chichi") that keep reaching great heights. These socalled lignotubers can also be observed on the Sumter plantation (see Usage-page) where the trees are regularly cut down to groundlevel and produce lignotubers that give new shoots and roots.

The Ginkgo also produces peg-like structures (chi-chi = nipples, sort of "aerial" lignotubers) along the trunk and branches that can grow into the ground and form roots as well as leafy branches above because of the embedded vegetative buds, which is characteristic only for the Ginkgo. chichi with leaves (photo Sando Tomoki)The chichi (Chinese: zhong ru) seem to be connected to traumatic events, environmental stress and individual properties of a tree. It is seen with old, but also with younger trees. It is thought the chichi, its resistance against diseases, its adaptability and individual properties of the tree etc. contribute to the long history of the survival of the Ginkgo.

Here you can read the stories of the tree.

The Ginkgo or maidenhair 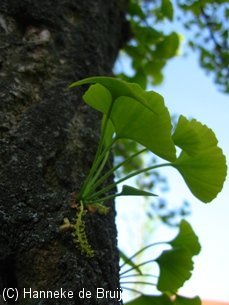 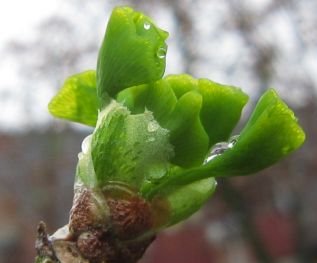 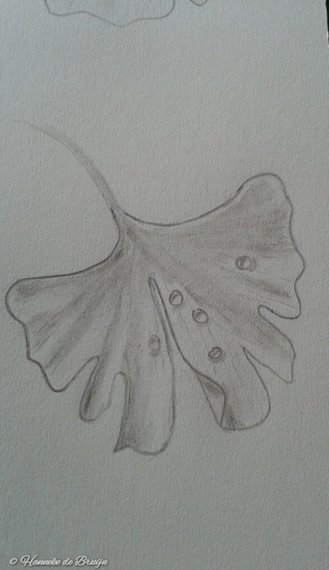 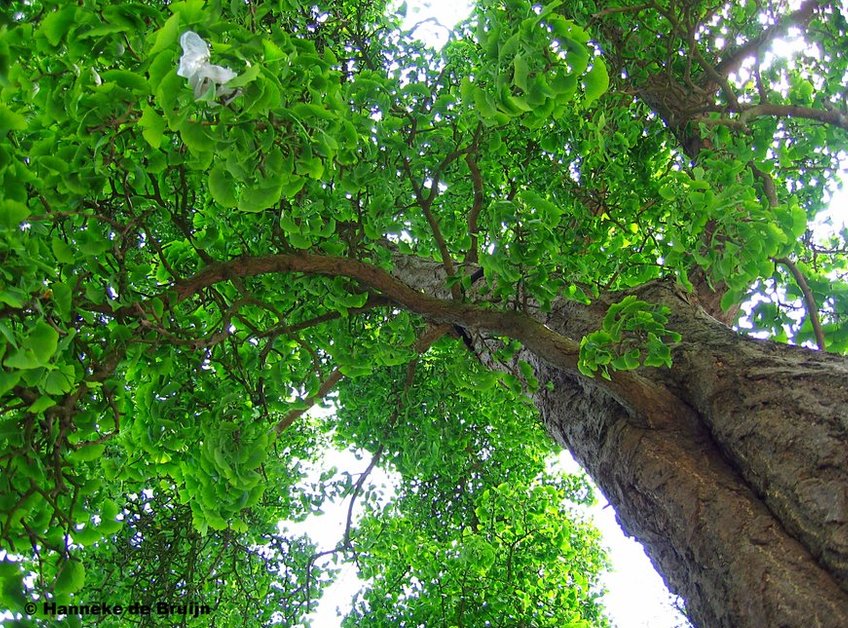 On our traveling tour towards the marches and ´flatlands´we encounter thos big Ginkgo on a parkinglot at a supterstore in New Romney. You ususaly do not see that big Ginkgo´s on a parking lot. Tht strikes us as weird. Makes you wonder who was first. the tree or the parking... 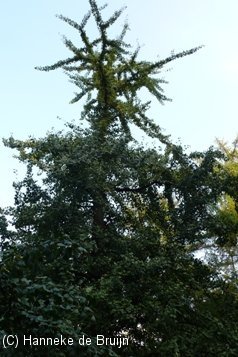 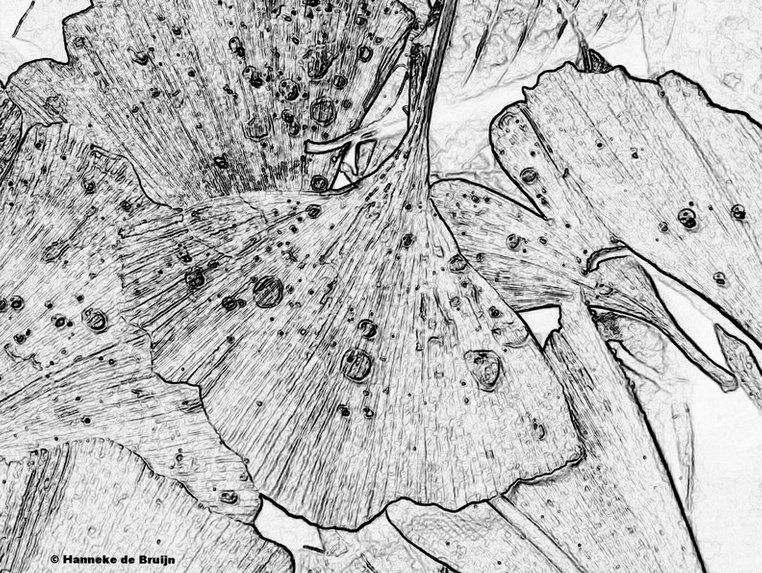 This Ginkgo is in France. We met him in Calais, On the way to the ferry to Dover. He was large and old. Standing behind an old house. Unfortnately I havent got a better picture. He was at least 3 or 4 m girth. 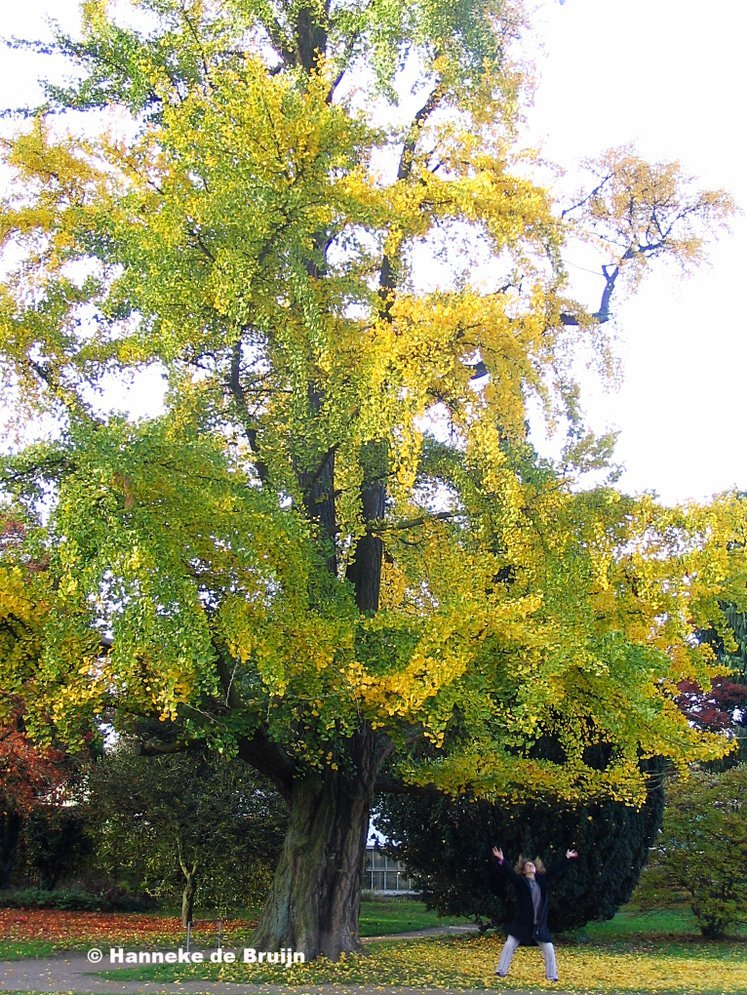 On one of our advetures in Hamburg, we met this tree at and old river arm, near the harbour of Hamburg. Completly yellow and you could hear the leaves falling down. 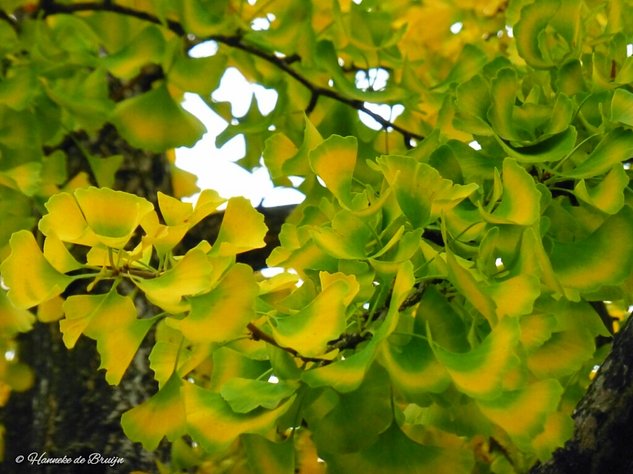 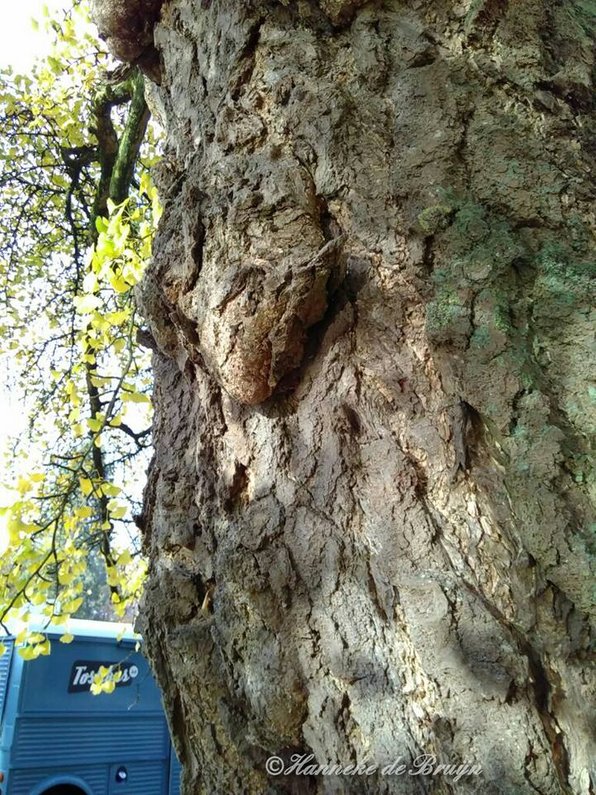 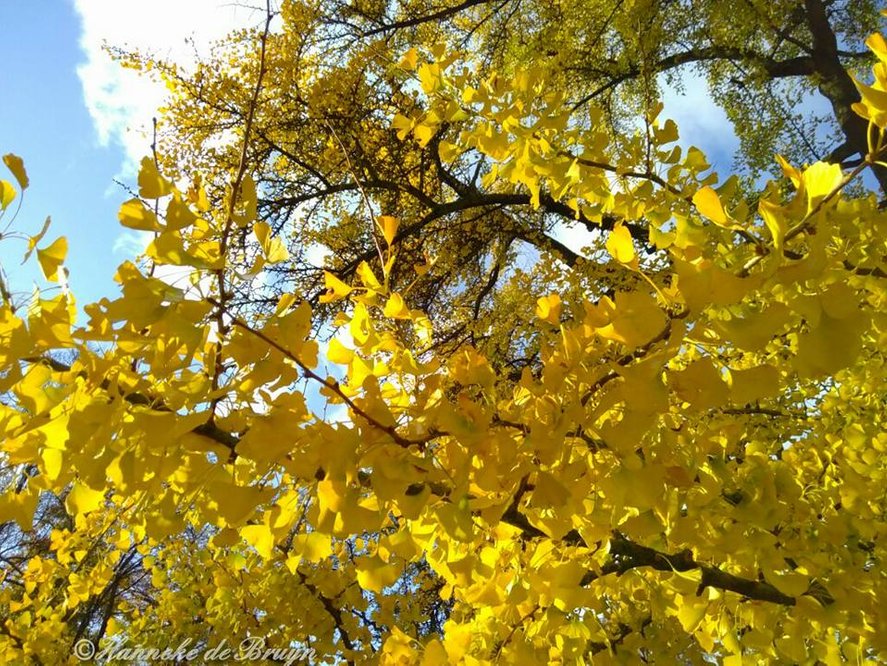 Story of this tree

We went to a so called forest fair to the grounds of De Vanenburg, NL, unknown of the special tree collection over there. Then we spotted this Ginkgo, and old one. He is standing on a Estate of the 17th century and possibly planted in that time. It was a pure prestige in that time to have special exclusive trees. It was pooring rain when we arrived, but halfway the sun came out and the Ginkgo Was Shining Gold... He is quiete some years as he shown his chi-chi´s (the overhanging bark, as you can see in the right picture)

I am always getting excited and happy when I see a Yellow Ginkgo...