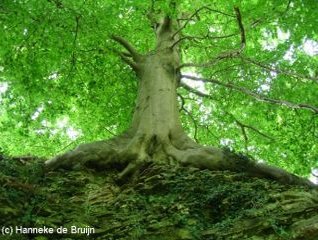 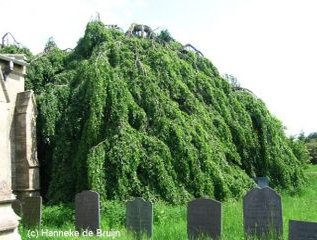 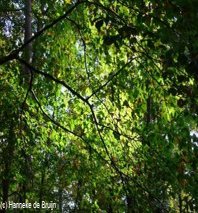 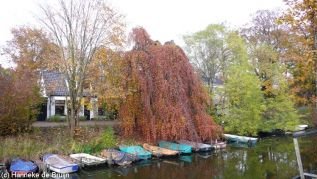 A Beech is an Majestic tree. A tree with an royal feature with his smooth bark and cathedral lanes. When you stand beneath a heritage tree you feel yourself protected by the green arms of the beech. The leaves filter the sunlight in pale green and change your view around you. Especially in spring. Tender, gently green leaves and light.

The appearance varies according to its habitat; in forest conditions, it tends to have a long, slender light- grey trunk with a narrow crown and erect branches, in isolation with good side light the trunk is short with a large and widely spreading crown with very long branches to protect his sensitive bark. The leaves are alternate, simple, and entire or with a slightly toothed margin, 5-10 cm long and 3-7 cm broad, with 6-7 veins on each side of the leaf . When toothed, there is one point at each vein tip, never any points between the veins. The buds are long and slender, 15-30 mm long and 2-3 mm thick, but thicker (to 4-5 mm) where the buds include flower buds. The European Beech starts to flower when it is between 30-80 years old. The flowers are small catkins which appear shortly after the leaves in spring. The seeds, called beechnuts, are small triangular nuts 15-20 mm long and 7-10 mm wide at the base; there are two nuts in each cupule, maturing in the autumn 5-6 months after pollination. Flower and seed production is particularly abundant in years following a hot, sunny and dry summer, though rarely for two years in a row. The nuts are an important food for birds, rodents and in the past also people, although they are no longer eaten by man. Slightly toxic to man if eaten in large quantities due to the tannins they contain, the nuts were nonetheless pressed to obtain an oil in 19th century England that was used for cooking and in lamps. They were also ground to make flour, which could be eaten after the tannins were leached out by soaking.

The natural range extends from southern Sweden (with some isolated locations in southern Norway) to central Italy, west to France, southern England, northern Portugal, and central Spain, and east to northwest Turkey, where it intergrades with the Oriental Beech (F. orientalis), which replaces it further east. In the Balkans, it shows some hybridisation with Oriental Beech; these hybrid trees are named Fagus x taurica. In the southern part of its range around the Mediterranean, it grows only in mountain forests, at 600-1,800 m altitude. Although often regarded as native in southern England, recent evidence suggests that it did not arrive in England until about 4,000 BC, or 2,000 years after the English Channel formed after the ice ages; it could have been an early introduction by Stone age man, who used the nuts for food. The beech is classified as a native in the south of England and as a non-native in the north where it is often removed from 'native' woods. Localised pollen records have been recorded in the North of England from the Iron Age by Sir Harry Godwin. Changing climatic conditions may put beech populations in southern England under increased stress and while it may not be possible to maintain the current levels of beech in some sites it is thought that conditions for beech in north-west England will remain favourable or even improve. It is often planted in Britain.

Climate and temperatures vary, though humidity needs to be constant. Little is required of the soil so long as it is well drained. Though not demanding of its soil type, the European Beech has several significant requirements: a humid atmosphere (precipitation well distributed throughout the year and frequent fogs) and well drained soil (it can not handle excessive stagnant water). It prefers moderately fertile ground, calcified or lightly acidic, therefore it is found more often on the side of a hill than at the bottom of a clayey basin. It tolerates rigorous winter cold, but is sensitive to spring frost. In Norway's oceanic climate planted trees grow well as far north as in Trondheim.

A beech forest is very dark and few species of plant are able to survive there, where the sun barely reaches the ground. Young beeches prefer some shade and may grow poorly in full sunlight. In a clear-cut forest a European Beech will germinate and then die of excessive dryness. Under oaks with sparse leaf cover it will quickly surpass them in height and, due to the beech's dense foliage, the oaks will die from lack of sunlight. Foresters may assure the oaks' survival by cutting young beeches with a billhook 10 cm off the ground, which can produce magnificent bonsai. The root system is shallow, even superficial, with large roots spreading out in all directions. European Beech forms ectomycorrhizas with a range of fungi including members of the genera Amanita, Boletus, Cantharellus, Hebeloma and Lactarius; these fungi are important in enhancing uptake of water and nutrients from the soil.

Here you can read my stories about the trees. 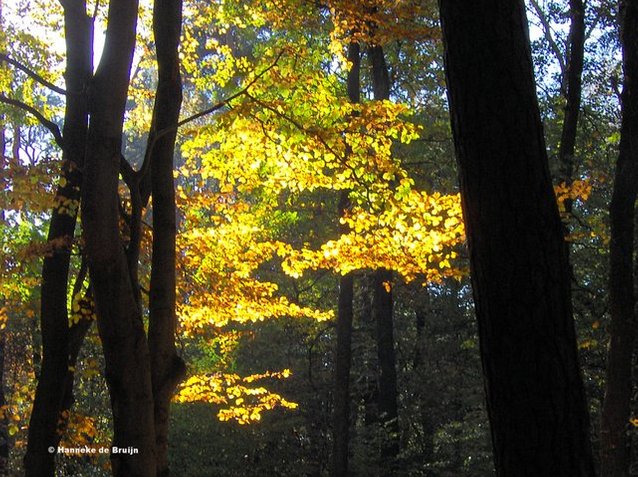 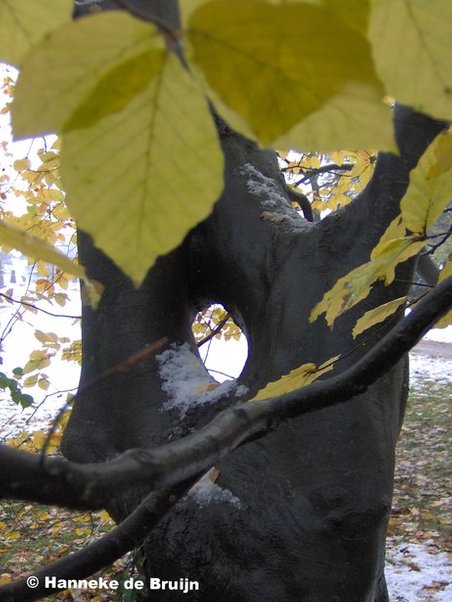 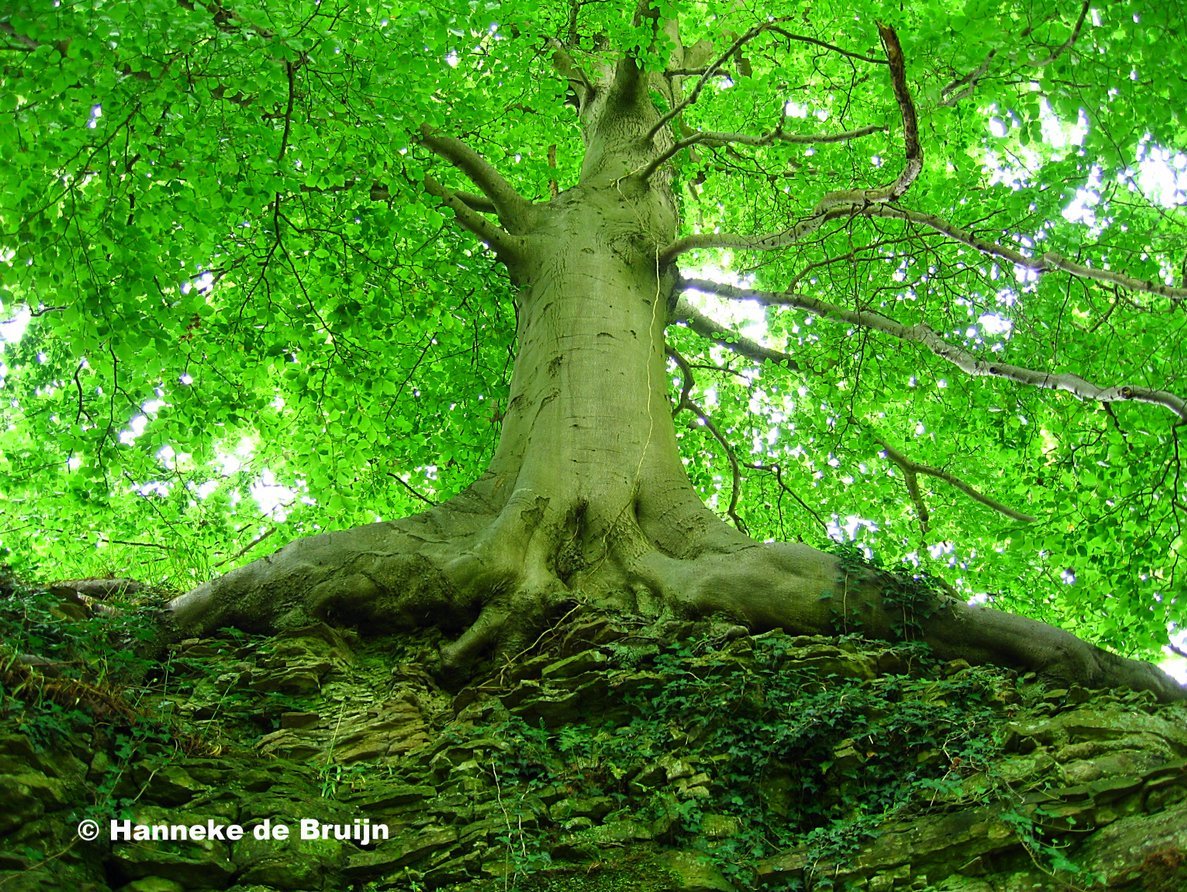 Arriving at the Sweet Chestnut Avenue of a Mile long, I went to wander over the area of the avenue. I discover that the Avenue stops very abruptly. That is because there was a small cliff. And on the edge of the cliff the Sweet chestnut and beech were standing. I climb in to the depth of the cliff (20 meter deep, and full of fallen trees) and look up: amazing! Trees that towering up on the edge, like a wall of a castle. With his roots clinging on the edge, making it dramatical. Magical. 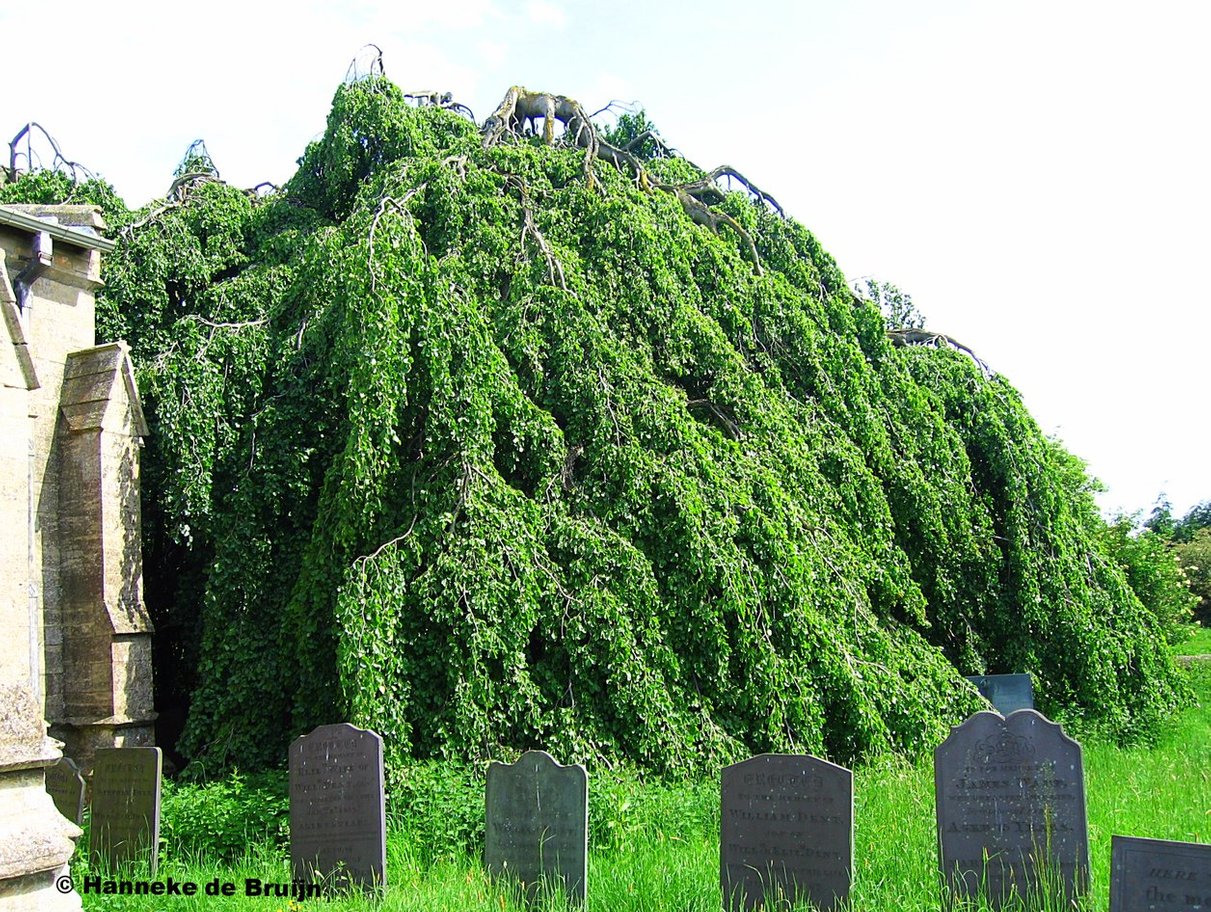 Driving trough the single track roads in the county, and see glimpses of the wonderful landscape because of the hedgerows, you suddenly come to an halt by an Y junction. Right in front of you is an ancient old Church (Saint Nicolas, The village dates from before 1100AD) with an perpendicular stone tower, and next to it and even older ancient weeping beech. The leaves and branches all bow to the ground as a huge skirt. Huge on the outside. When you step through the curtain of leaves, you step in a darker world. With tombstones next to his stem from the early 1800. The size of the trunk is well enough to make you wonder the real age of the tree. 200 years at least. He looks like an enormous, amazing beast. As you look at the top of the tree you can imagine a back of an ancient dinosaur. All barren and rough. Never seen such an enormous weeping beech.

To find this specific hill in the Malvern hills was an adventure on itself. No signs of signpost. Finally I found it. There was just an excursion started were I could ask if I was on the right place. I climb up a steep ramp, an old Iron Age Hill Fort, and look out for ancient trees... On the top there there was the Iron hill fort. It was a mound of earth in a circle and in the middle it was a bit lower and it was flat. This all was naturally overgrown with grass and vegetation. Finally I found this 12 arms beech on the earth wall. Not ancient old, but special it is.